“I started with small accounts, such as local hair salons, and then started knocking on doors,” says Gardner, a frequent Planet Laundry contributor and Coin Laundry Association (CLA) Board member. Nearly a decade since he purchased Sel-Dale Laundromat, in St. Paul, Minn., Gardner has grown commercial wash/dry/fold sales to more than $22,000 per month. 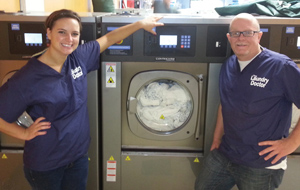 Meanwhile, his self-service revenue hums at $12,000 monthly. In a suburb of Detroit, Stucky's New Wave Laundry caters to a demographic mix that's not a big self-service sales generator. Early on, he knew he needed to capture commercial business. “My son, Darin, picked up new accounts and we established a commercial route,” he says.

No wonder these storeowners work to continually expand commercial business; it generates another powerful revenue stream that impacts profits and business value. “Commercial work allows you to create profitability, especially if you have debt service,” says Stucky. As commercial volume increases, utilities-to-gross decreases substantially, he points out.

Expanding from a Vended Laundry Foundation 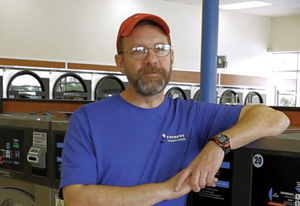 Maes, Stucky and Gardner agree there's no better place to cultivate commercial business than from a self-service laundry– a location with most of the needed equipment capacity and labor already in place. A successful self-service laundry is only fully utilized 15-20 percent of the time, according to Stucky. Rather than let equipment and staff sit idle, why not busy them with commercial work?

In the beginning, Gardner's staff kept pace with incoming commercial work. “But, at a certain point,” he says, “I had to expand and hire staff to handle just the commercial side of business–leaving laundry attendants to help out self-service customers.” It's important not to sacrifice in-store customer service as commercial volume grows, he warns.

In Houston, Maes looks for employees who can work on a will-call basis to match his volume. “We have a lead attendant who floats–allocating his time between commercial business, training staff, filling in for sick employees and stocking vending machines.” They all agree commercial wash/dry/fold is simpler than personal wash/dry/fold to manage in terms of labor production, and simultaneously, much more profitable. 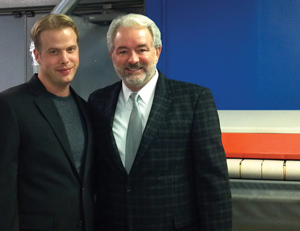 Wanting more business, and realizing they could get it from accounts craving ironed items, they each invested in a Continental Flatwork Ironer. In each case, the ironers were installed away from selfservice customers in a separate area–ensuring safety.

The ironers catapulted commercial revenue and Maes, Stucky and Gardner discovered they could leverage larger accounts, even when those accounts required very little ironing.

Maes's big opportunity came from a company that rents corporate apartments. “We started doing 20 pounds of laundry at a time, and over six months, earned all of their business,” says Maes. “We purchased a delivery vehicle and babied them. It takes time to develop commercial business. When you find it, you have to be prepared to handle that opportunity.”

Shortly thereafter, that business owner requested pressed sheets and duvets. To meet her needs — and to capture additional commercial business — Maes installed his Continental Flatwork Ironer in February 2012. The ironer opened the floodgates to new business, strengthened overall profits and differentiated his laundries from their competition.

Meanwhile, Stucky and Gardner had already added Continental Ironers to their equipment mix. In doing so, they successfully captured larger commercial accounts, even when the percentage of ironed goods was small. All three experienced a return on their ironer investment of less than a year.

“The ironer paid for itself in the first year,” says Gardner. “Now it pays for itself every month.” 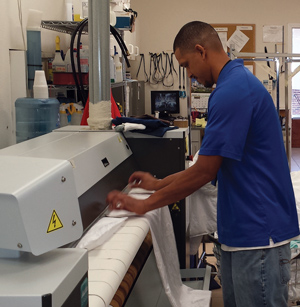 They chose Continental ironers because they quickly finish an array of items — from pillowcases, napkins and tablecloths, to sheets, duvets and lab coats. Because they are engineered to automatically modify cylinder speed based on variations in the cylinder temperature, operators can feed damp items into the ironer directly from the washer–bypassing dryer conditioning. This boosts laundry productivity.

Using the 76-inch ironers, Maes, Gardner and Stucky process tablecloths and napkins in one pass, as well as large items, such as queen and king sheets by first folding them in half. “I selected the smaller ironer because I was short on space and did not want to add staff to run it,” says Maes. “One person operates the ironer and folds items as they are pressed.”

For Maes, it's about finding niche markets and customers who demand high-quality results and service. “I'm not here to compete with commercial laundries and drycleaners,” he says. Thanks to the ironer, however, he has differentiated his Express Laundry Centers from “99 percent of the other Laundromats offering wash/dry/fold service.”

Gardner, who caters to an array of clients, maintains sales mushroomed because of his ability to iron sheets and pillowcases.

“We are very profitable because of the ironer's speed and quality finish,” he says. “That single piece of equipment allowed me to do work for massage therapists, spas and acupuncturists. They started talking about my business to friends. Then business boomed.”

Thanks to the ability to process flatwork using the ironer, Stucky elevated profits by $800 per week, while Maes doubled wash/dry/fold sales in less than a year.

Moving into Food and Beverage

Stucky, who is an experienced drycleaner and vended laundry owner, quickly tapped the food and beverage market. 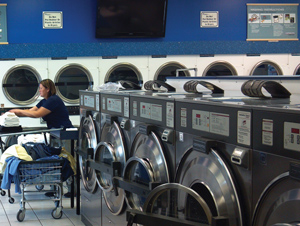 They are dedicated to commercial work. Using the ironer in concert with the soft-mount washers, Gardner plans to expand into the food and beverage market. “It's hard to properly clean food and beverage items using a public coin washer because there should be breaks in between chemistry baths and items require extreme water temperatures,” he says. “I needed a fully programmable washer with hundreds of on-premise programming options. We run linens straight from the soft-mount washers through the ironer, making the process a lot quicker.”

Gardner's new E-Series on-premise washers allow him to control water temperature by degree, wash rotation speed and duration, water levels, bath cooldown by degree and extract speed. He can also program a wash cycle of as little as three minutes up to an extended program lasting for hours or days. In time, Gardner attests he'll bolster commercial revenue significantly. “I think I can easily do $70,000 per month in my store without getting in customers' way,” he says.