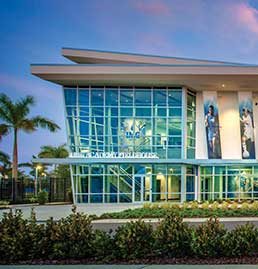 IMG Academy’s 500-acre campus not only touts world-class athletic facilities — where student-athletes train and compete — it also boasts a Sports Laundry System® that’s proven in clinical studies to kill 99.9 percent of bacteria and viruses, including staph and antibiotic-resistant MRSA, in the wash.

The System isn’t just used to clean athletic laundry, it’s relied on to help prevent the spread of infection among student-athletes. It works by cleaning and disinfecting everything from loops, shorts, pants and sweats, to uniforms and towels, according to Robinson. “Because it doesn’t just clean, but truly disinfects dirty laundry in the wash, the system helps prevent the spread of infection to student-athletes from contaminated laundry,” said Robinson.

Superbugs like MRSA tend to spread easily in close-knit environments, including locker rooms, according to the Centers for Disease Control (CDC). The CDC’s “Antibiotic Resistance Threats in the United States, 2013” warns the public of a number of hard-to-treat pathogens, including MRSA. Staph bacteria, including MRSA, are among the most common causes of healthcare-associated infections, according to the CDC. Such infections can also harass athletic locker rooms, where athletes come into frequent contact with each other, as well as with contaminated laundry and surfaces. Once infected, athletes can’t participate in practices or games until the infection is resolved.

Programmable to Clean & Disinfect a Variety of Items

The Sports Laundry System washers are programmed by item type to properly combine ozone, chemicals, rotation action, water temperatures and levels, number of baths, and extract speeds for superior results. Once a load is started, ozone is introduced into the washer sump. The ozone works to break up organic matter, clean and disinfect.

Robinson, who served as an equipment manager on another campus with hard-mount washers, attests the Sports Laundry System saves him considerable time. Its high-speed soft-mount washers generate extract speeds of up to 354 G-force — considerably higher than typical hard-mount washers. In doing so, they remove more moisture from laundry, which cuts dry time and bolsters laundry productivity.

“Items removed from the washer are nearly dry,” said Robinson. Laundry, which took 45 minutes to dry where he used to work, now takes just 20 minutes. “Our system at IMG really speeds up the process,” he said.

That’s a good thing. It means Robinson can dedicate more time to his other responsibilities, including managing inventory, ordering uniforms, budgeting, and traveling with the football and baseball teams.